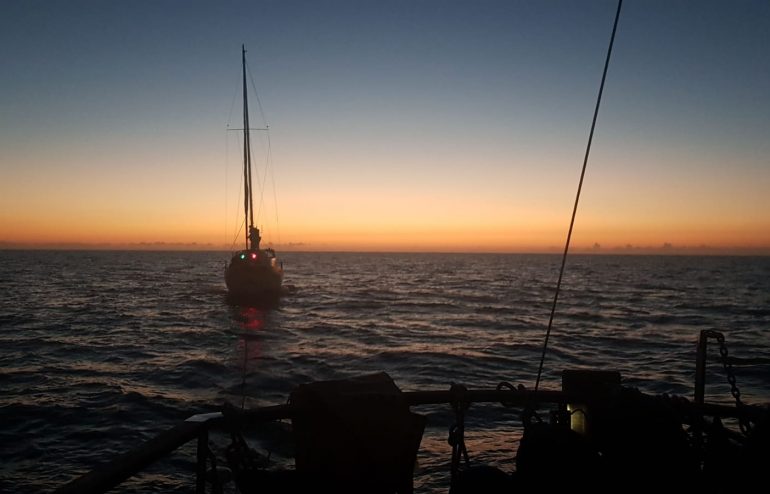 Captain to the Rescue!

Not your usual wake up call! Reliance Captain, Cive Lonsdale received a call from the Coast Guard in the Solent in the small hours of the morning. They asked him to help rescue a yacht drifting into the shipping lanes. The yacht’s motor had failed and it was was unable to get itself back on course.

0240 this morning requested by Solent coast guard to alter course and assists a 35ft yacht Caprice with engine trouble drifting into the separation zone SW of Dungeness.  Have Caprice in tow eta Eastbourne 0700. All ok sea state good. Might be able to leave him at anchor off Eastbourne as marina mot open till 0900. If not I have offered to tow him to Brighton. Will update shortly.

The recuse went smoothly with a calm sea and an easy tow to Eastbourne.

Captain Clive Lonsdale was in the middle of delivering a Nauticat 35 from Chatham, Kent to Noss-on-Dart before he was called to act by the Coast Guard at 3am this morning. He updated us again as the morning progressed:

Just been updated. Eastbourne closed to Covid. We’ve been asked to tow her to Newhaven 11nm approx 2.5 hrs around Beachy Head

Due to Covid-19, and the new impending lockdown in England, the situation proved uncertain as Captain Clive and all in tow (if you pardon the pun) have had to continue onto Newhaven. The final update from the Captain came in the later half of the morning as Clive confirmed,

Have handed over the tow to Newhaven lifeboat.  All very grateful and were back on course.

With the adrift boat safely in good hands at Newhaven, Clive and his crew have continued on their journey across the UK South Coast. With an estimated arrival time of tomorrow, they acted professionally, heroically, and took everything in their stride.

Just a normal day in the life of Reliance Yacht Management and its crew. We wish Clive, his crew, and the unfortunate boat, a safe onward journey.

Adventures on the high seas of the Solent